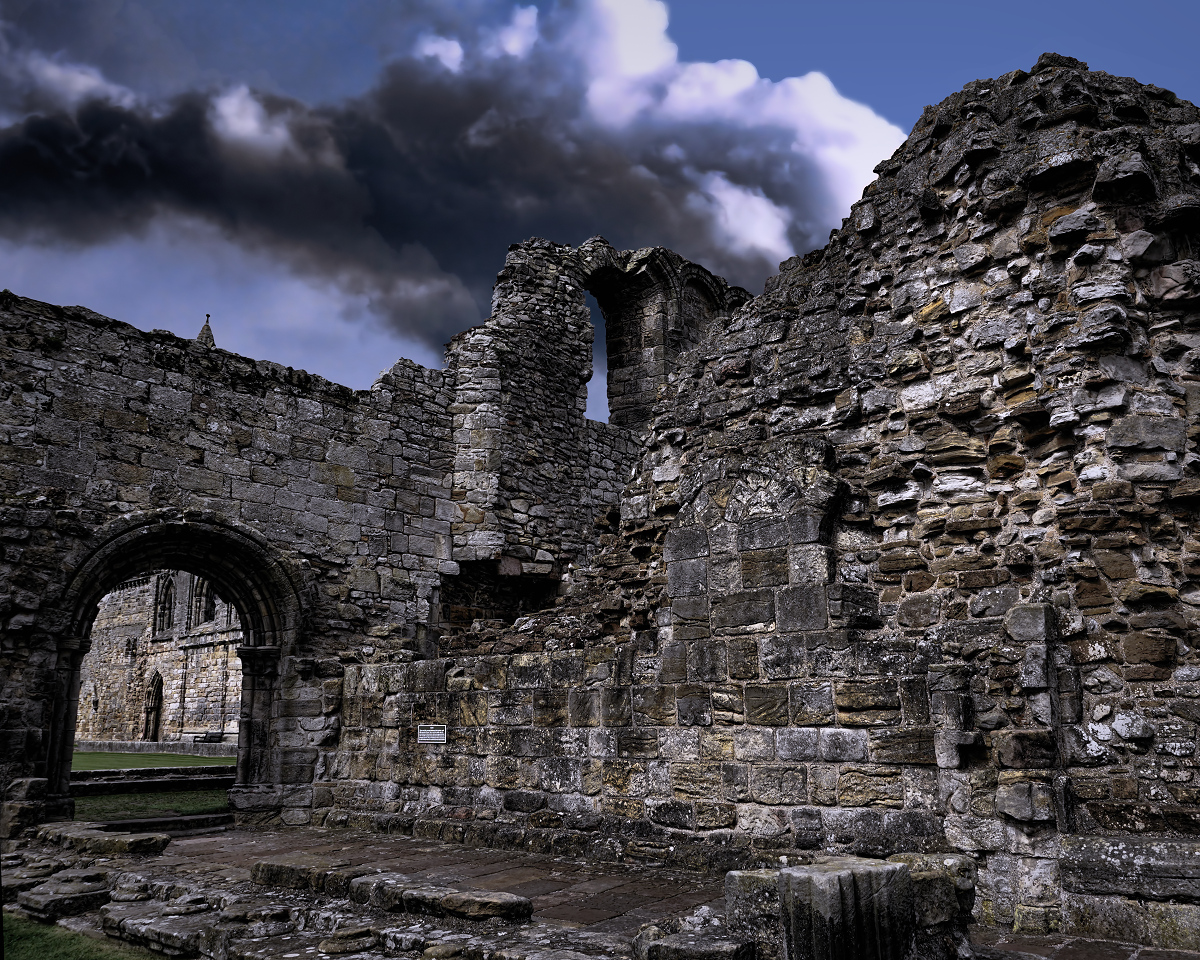 The Deaths of George Wishart and Cardinal Beaton: Martyrdom and Murder at St Andrews Castle

The martyrdom of George Wishart at St Andrews on the 1st of March 1546 has a déjà vu feel to it. Only eighteen years prior to this, Patrick Hamilton had a similar fate at the hands of a Catholic Beaton in the town, once said to hold the relics of Scotland’s Patron Saint.

George Wishart was born near Fordoun in Kincardineshire. He graduated from King’s College, Aberdeen, before studying at the University of Leuven in Belgium. It was there that he first became interested in the teachings of Calvin. The Protestant Reformation was spreading across Europe and had already reached Scotland’s shores. These were perilous times for those embracing the new radical ideas proposed by men like Luther and Calvin. Heresy was punishable by death and the Catholic Church still held the balance of power in Scotland.

Upon his return to Scotland, Wishart became a schoolmaster in Montrose. However, his decision to teach the New Testament in Greek infuriated the Bishop of Brechin.  He was charged with heresy. Wishart fled to Bristol in England. Yet again, his teachings got him into trouble. This time he fled overseas and spent the next three years in Germany and Switzerland. In 1542 he taught at Cambridge University. There, he earned the reputation of being kind and generous to those in need. He was known for giving away his clothes and bedsheets to the poor.

George Wishart and his Return to Scotland

In 1543, Wishart returned to Scotland, where he preached in Montrose, Dundee and the West. While preaching in Dundee, he came to the attention of Cardinal David Beaton, the nephew of Archbishop Beaton who was responsible for the death of Patrick Hamilton. He was ordered out of Dundee and on a parting note stated that trouble would come upon them for chasing God’s messenger. Four days later, plague broke out in Dundee. Wishart returned to Dundee to comfort the sick.

Attempts on the Life of George Wishart

Meanwhile, Cardinal Beaton was rapidly becoming George Wishart’s nemesis.  He employed a desperate priest, by the name of John Weighton, to kill him. At the finish of a sermon in Dundee, the crowd parted and there was the priest, dagger in hand! Wishart wrested the knife from his opponent’s hand. Incensed, the crowd began braying for the priest’s blood but Wishart stood resolute. Instead, he embraced the priest, forgave him and sent him on his way.

This only served to whet Beaton’s appetite for blood. This time he turned his hand to forgery and pretended to be an old friend of Wishart’s, the Laird of Kennier. He purported to have taken sick and desired his ‘friend’ to come with all possible speed. In the meantime, sixty of the Cardinal’s men lay in wait. Wishart set out, but something did not sit easily in his mind. He turned back and sent some of his friends to investigate what was happening. The Cardinal’s plot was blown.

Upon their return, Wishart remarked, “I know I shall end my life by that bloodthirsty man’s hand’s, but it will not be in this manner.”

His words were prophetic.

Who was Cardinal Beaton?

Cardinal David Beaton was the Archbishop of St Andrews and the last Scottish Cardinal before the Scottish Reformation. He was a hugely powerful man who embroiled himself in the turbulent politics of the day. As such, he was a man of many enemies. The reformers wanted to do away with the vow of celibacy priests were required to make. It was, therefore, particularly galling that Beaton, had a mistress, Marion Ogilvy who was the mother to his eight children. That was just the tip of the iceberg. Beaton had a string of mistresses and fathered some twenty illegitimate children. The ordinary Scots deplored this double standard, where wealthy prelates punished those who advocated the marriage of the clergy while living in open concubinage themselves.

Beaton found his popularity waning after he arrested a Friar called John Rogers for preaching heretical doctrine. Rogers was thrown into the infamous bottle dungeon at St Andrew’s Castle. Rogers “died while trying to escape.”

The Capture and Trial of George Wishart

By now George Wishart had a new and ardent follower, none other than the young John Knox. While preaching in Ormiston, he was taken into custody by the third earl of Bothwell, who was the Sheriff of East Lothian. Bothwell promised to protect Wishart from the Cardinal. However, Bothwell had aligned himself with Beaton. Wishart was sent to Edinburgh in late January 1546 and then onto St Andrew’s Castle, the lair of his enemy.

Wishart was put on trial with John Lauder, Scotland’s Public Accuser of Heretics, prosecuting. He was charged with eighteen counts of heresy. The outcome was fairly predictable. Heresy was a capital crime. Beaton, however, took the precaution of sending the audience away before sentencing Wishart to death.

The Execution of George Wishart

On the First of March 1546, George Wishart was taken to the scaffold to the west of the castle. Wishart threw his purse to the onlooking beggars. After a final prayer and exhortation upon the scaffold, he forgave the executioner with a kiss on the cheek. Then he was hanged and burnt at the stake. According to John Knox, amongst Wishart’s last words was a prediction of Beaton’s imminent death.

A Gathering of Conspirators

It was not long before George Wishart’s prophecy was fulfilled. The night began to descend on the 28th of March 1546 as the conspirators gathered in a house close to St Andrews Castle. Norman Leslie arrived first with five of his friends. It was a house he had been in the habit of using, therefore it roused no suspicion. Other men slipped into the townhouse, under the cover of darkness.

As dawn broke on the morning of the 29th March, ten or twelve of the conspirators joined with a group of stonemasons waiting for the castle gates to open. Kircaldy of Grange diverted the attention of the Porter while Norman Leslie led a contingent of men inside the castle, walking past Marion Ogilvie as she left the castle.

Finally, his kinsman, John Leslie arrived with four men. Something about them alerted the porter who tried to raise the drawbridge. The conspirators snatched his keys and threw him in the moat. The stonemasons fled and soon the conspirators were herding fifty other people out of the stronghold.

Cardinal Beaton stuck his head out of a window and asked what the commotion was. Barring the door to his bed-chamber, he refused to come out until the assassins vowed, they would burn him out. At length, he opened the door and then sitting on a seat pleaded, “I am a priest, I am a priest; you will not slay me.”

The men came with daggers until James Melville ran his sword through the priest twice. Beaton’s dying words were “Fie, fie, I am a priest, all is lost.”

Beaton had been brutal in his pursuit of Protestant ‘heretics’. The Protestant response was equally savage.  His mutilated body was then suspended out of one of the castle windows by an arm and a leg to form the cross of Saint Andrew.

St Andrews Castle became a gathering place for Protestants from all over Scotland, including John Knox. They held the castle against Marie of Guise’s Troops. Marie of Guise was the Guardian of Scotland during Mary Queen of Scots’ minority. Meanwhile, they ransacked the nearby St Andrews Cathedral. They hoped for support from England’s Henry VIII. Instead, French Naval ships arrived and bombarded the castle. The castle surrendered on the 31st July 1547. John Knox was captured and sentenced to the galleys. When he eventually returned to Scotland, it was as the nation’s reformer.

Meanwhile, the remains of Cardinal Beaton were pickled in a barrel of brine and left in the dungeon into which he had thrown John Rogers.

The Cardinal’s spirit is still said to roam the castle to this day. However, his is not the only restless spirit to roam the streets of St Andrews. 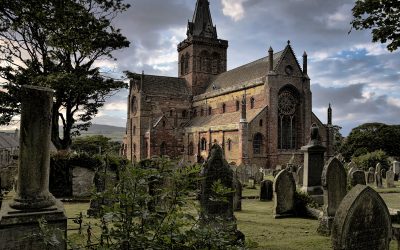 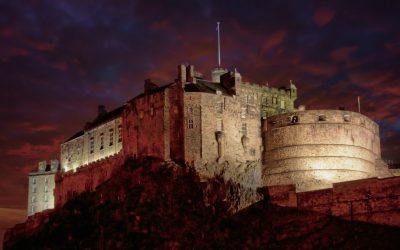