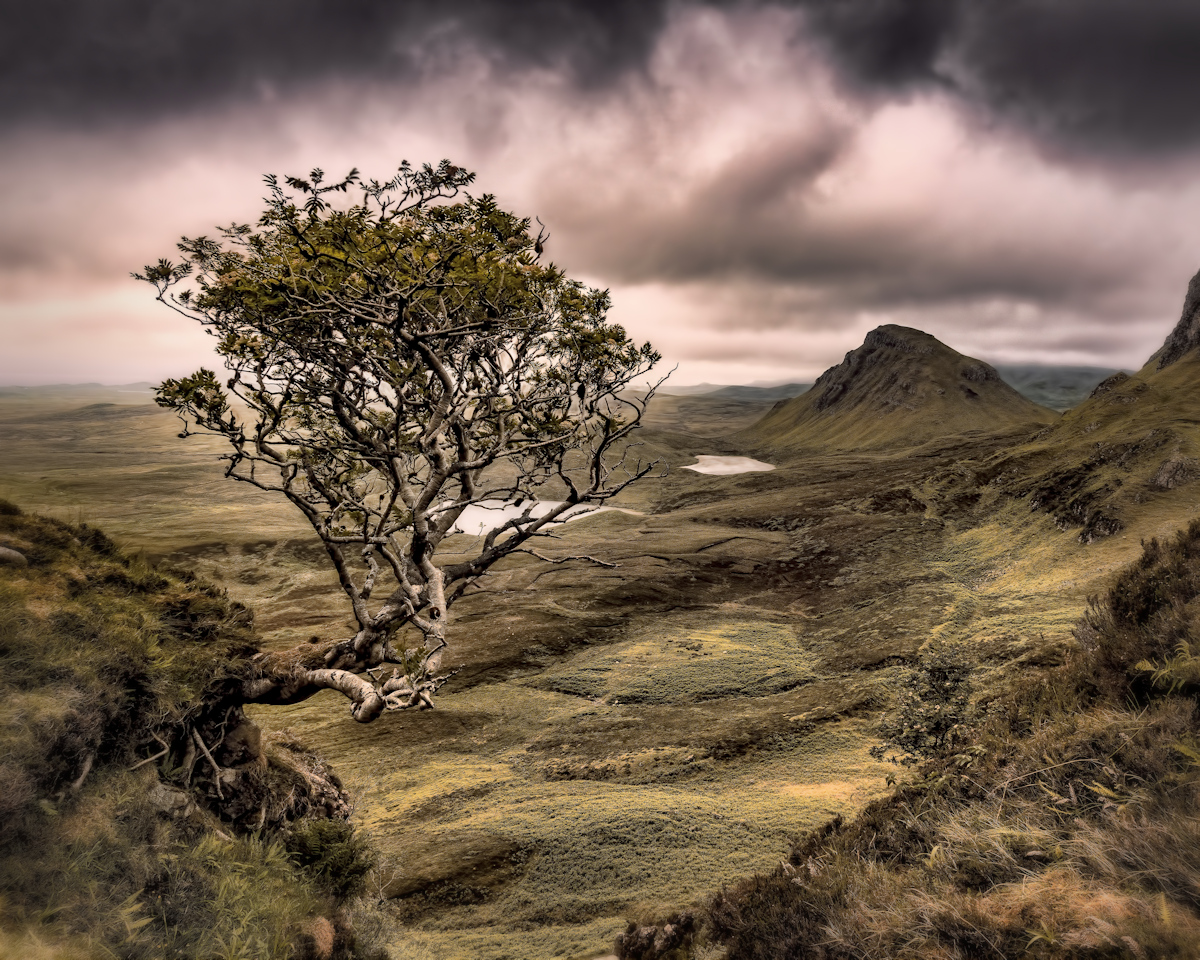 The Lore of the Scottish Rowan Tree

The rowan tree has a special place in the hearts of the Scottish people. It was once worshipped by the Druids, planted near the doorways of homes as a protection from witches, used as part of the rituals in quarter-day celebrations and features prominently in Scottish folklore. Perhaps the most famous is the tale of Fraoch and Maeve.

The Tale of Fraoch and Maeve

Fraoch Eilean is an island found on the northern reaches of Loch Awe in Argyll. Its name in Gaelic literally means ‘Heather Island’ although it is more likely that it got its name from the Celtic hero, Fraoch, for it is here that a story unfolds about the love-struck warrior. Fraoch Mac Fhithich of the Sharp Blades was a handsome warrior. His hair was said to be black, fine and glossy like raven’s plumage smoothed on snow. His heart beat solely for his one true love, Find-abair, the daughter of Maeve, a beautiful maiden with golden hair.

Alas, Maeve also loved the dark-headed hero and her jealousy soon turned to an all-consuming hatred. Then hatred turned to vengeance and before long, she was plotting his demise.

On Fraoch Eilean was a rowan tree. But this was no ordinary rowan tree.  Its fruit was said to restore youth to the aged and to satisfy hunger for three days at a time. However, at the foot of the tree lay a fierce she-dragon, coiled around the tree’s trunk. Her sole purpose was to shield the tree from those who would steal the precious berries.

Knowing of the dragon, Maeve hatched a treacherous plan. She feigned an illness and then sent for Fraoch. She entreated him that she would die unless he alone could pluck for her a handful of the fruit of the Cold Lake.

He set off at once, swimming across the icy waters to the island. Using all his stealth he evaded the dragon and harvested the luscious berries. Imagine Maeve’s fury when Fraoch returned unscathed! So, she set about scheming once more. Alas, she was still ill, she claimed but perhaps the fruit was not enough. The whole tree was needed, torn from its roots. What lover will not travel to the ends of the earth to spare their sweetheart the pains of losing a loved one?

Once more Fraoch dived into the cold water of the loch. Once more he evaded the sleeping beast and it seemed that he had achieved the impossible. But the weight of the tree slowed the swimmer down and he had broken the ancient taboo and cut the tree. Before he made the shore, the dragoness had awoken. She plunged into the water and in her fury, soon had the warrior clamped between her jaws. With no weapon to defend himself, the water turned red.

Find-abair was anxiously watching from the shore and seeing her lover’s distress, threw him her golden knife. He plunged the blade into the beast. Alas, it was too late. Both Fraoch and the dragoness fell dead on the Shore of the Bare Stones. Grasping her true love in her arms Find-abair wailed a wretched lament, but her grief was too great. Sinking to the bosom of her handsome warrior, her heart gave out. A cairn was raised over their grave and the island was renamed after the hero.

Meanwhile, Maeve thought she would try out the youth-giving properties of the fruit. However, because her heart was not pure, the berries turned to deadly bane and poisoned her!

The Many Names of the Rowan Tree

So, what was it about the rowan tree which made it so special and earned it so many different names? It is known as the mountain ash or in Scots it can be the Quicken, Raun, Rodden, Rone berry, Rone tree, Roddin-tree or Rountree. In Gaelic, it is known as the Caorann (pronounced choroon, the ‘ch’ as in loch). Many Highland Place names bear the Gaelic name of the rowan:  Beinn Chaorunn in Inverness-shire and Loch a’chaorun in Easter Ross to name a few. Then there is Ardlui in Loch Lomond, possibly named after its old Gaelic name, Luis, from the Ancient Ogham Script.

To the ancient people of Scotland, the trees were sacred. The Gods were worshipped in groves or Nemetons. Is it any wonder that the first writing, engraved on Scotland’s stones took the form of what looked like little trees? The Ogham alphabet is sometimes called the ‘Gaelic Tree Alphabet’ as each letter is assigned a tree or plant name. Each character or ‘tree’ is made out of a vertical reference line, known as flesc (flayshk) which looks a little like a stem or trunk with one or more slashes, or twigs protruding from it.

The Rowan as an Occult Plant

Perhaps the rowan tree has more mystical associations than any other tree in Scotland. Indeed, a disproportionate number of rowans are located next to standing stones. Could this be the remnants of plantings by Druids? These are hardy trees which grow at high altitudes up to 3,200 ft where they must endure the bitter freezing winds of winter.  Often solitary trees are found clinging in precarious crevices and gullies. The hilltops were sacred to the ancient peoples. Here the veil between the mortal world and the Otherworld was considered to be thin.   However, the tree’s physical features also added to its reputation as a protective force.

The Protective Power of the Rowan

As a result of its white blossom, it was deemed to be a ‘Faerie tree’ which could enhance psychic powers and the appearance of visions.

Red is thought to be the best colour to offer protection against magic thus the berries were seen as a powerful defence against fairies, witches, and the evil eye. In addition, each berry has a five-pointed star or pentagram opposite its stalk making its protective properties doubly potent.

It seems that from before the beginning of time the rowan has been used as a defence against the Sidhe (or fairies). Later it would be used as a charm against witchcraft, warding off the effects of the evil eye or preventing milk being spoiled or stolen by malign magic. Rowan twigs along with ivy and woodbine were woven into loops and placed under milk jugs, pails and churns to prevent the milk from being stolen.  Sprigs of rowan were either worn as protection or made into equal-armed rowan crosses bound with a red thread. These would then be sewn into the lining of coats or carried in pockets. They were also placed above doorways at Lughnasadh.

The Rowan and the Quarter Day Feasts

In Strathspey, it was customary for the people to make a hoop of rowan wood at Beltane and force sheep and lambs to pass through it, both in the morning and in the evening, as a charm against Black Magic.

However, in some parts of the Highlands, there were strong taboos about using the wood of the rowan. There was one exception:  the flour for ceremonial cakes on feast days would be made using a threshing tool made of rowan. This was called the buaitean.

Several verses have been recorded which show just how widespread the belief in the protective powers of the rowan were:

Make the witches tyne their speed.

From the north-east of Scotland:

From the Borders of Scotland:

Put the witches to their speed!

As the Scottish Protestant Reformation got underway, the use of charms and folk medicine was seen as witchcraft. In the trial of Issobelle Watsonne in Stirling in 1590, she confessed to using rowan and a fragment of a dead man’s finger to ‘cure the worm’.

A year later James VI, King of Scots would write in his treatise Daemonologie his condemnation of ‘such kinde of Charmes as commonlie dafte wives uses’ for protection of their families or livestock from the evil eye, …. ‘by knitting roun-trees, or sundriest kinde of herbes, to the haire or tailes of the goodes.’

Medicinal and Other Uses of the Rowan

However, the rowan tree’s uses were not all supernatural. As a medicinal plant, a distillation of its bark was given to cleanse the blood and to alleviate stomach upsets.  The berries were boiled in water until they turned into a pulp which was then strained through a muslin. This distillation could then be used as an effective gargling solution. The berries also contain high levels of vitamin C, hence their use as a treatment for scurvy. Rowanberries, apple, and a little brown sugar were made into a decoction used to relieve whooping cough.

The rowan’s wood is strong and resilient and is well suited for carving which makes it an excellent choice for walking sticks. It was also used for tool handles, spindles and spinning wheels. In the past, druids used the bark and berries to dye ceremonial garments black. The bark was also used for tanning leather, and people used rowan twigs for divining, particularly for metals.

The berries can also be added to alcoholic drinks. As well as a popular wine made in the Highlands, a strong spirit can be made from the berries. Today rowan berry jelly is still eaten in Scotland, often with game.

The Rowan in Modern Times

Even today many modern houses have a rowan tree in their front garden as a protection against evil. We have a rowan tree in our garden.  Over the course of the past few weeks, our resident blackbird family have descended and have been systematically stripping the tree of its clusters of bright red berries. Only this morning I notice that the berries have finally been consumed and the leaves are beginning to change colour. I sigh, remembering when the tree was a little sapling. When we moved into our current house, we uprooted the young tree and took it with us. Now it towers over me.

It is interesting to note that when the Scots emigrated to New Zealand, they carried with them the tradition of planting a rowan tree in the garden and it is still practised there today. Perhaps the relationship the Scots have with the rowan tree can be summed up in the words of the old folk song:

Thy leaves were aye the first o’ spring, thy flow’rs the summer pride

There wasnae sic a bonny tree in a’ the countryside 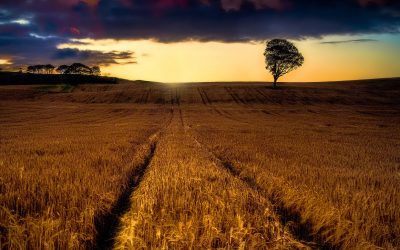 Lughnasadh is a festival where the first fruits of the harvest are celebrated on the 1st August. It has its origins in two separate festivals....