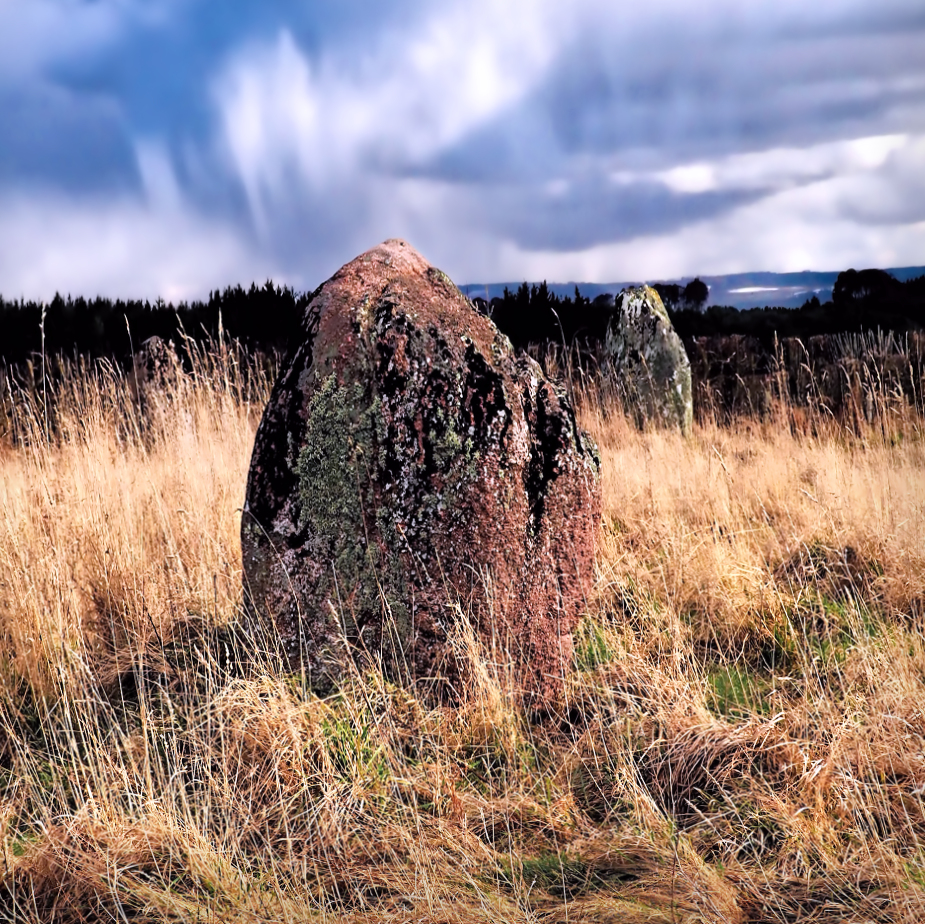 Spooky Scotland has taken us on some amazing journeys and we have made some exciting discoveries along the way. There is a mystical quality about Stone Circles. The sun was shining, although there is always a cold bite in the air in February in Scotland. We were standing in a field, a great mound of manure on one side and a stone circle on the other. A bemused tractor driver drove by, probably the farmer, wondering what in earth we were doing in his field. We gave him a coy wave and continued with our photoshoot. I had driven past the field many times and did not even know the stone circle was there. Then I discovered that it was a possibly a recumbent stone circle. I had never heard of a recumbent stone circle before and yet the northeast of Scotland is riddled with them. The fact that this stone circle was called the Deil’s Stanes (the Devil’s Stones) made it even more intriguing.

The stone circle is located in a field, outside the tiny village of Urquhart in Moray. According to a local legend if you walk around the remains of this stone circle, three times at midnight, the devil will appear. Hence the name, the Deil Stanes. It is also known as
• the Standing Stones of Urquhart
• the Innesmill Stone Circle
• the Lochhill Stone Circle
• Nine Stanes

Today only five stones remain of what was probably an original twelve stones on the circumference of a circle 33.5 metres in diameter. Another two fallen stones lie within its perimeter, apparently not in situ. They range in height from 1.0 metres to 1.9 metres and appear to be graded towards the south and south-south-west. This, along with the 19th-century reference by the minister of Urquhart, the Reverent James McLean, to ‘nine tall stones in a circle, two of them at the entrance to the altar’ suggest that this may be a recumbent stone circle, from which the recumbent and its flankers have been removed.

In a tale reminiscent of the Curse of the Clava Cairns, a local man Mr T Geddie wrote about the Deil Stanes:

“One of the stones was to be taken away to be built into a new steading at Viewfield. Mr Brown thinks this was prior to the building of the Innesmill steading, which dates from 1843. No sooner had the Stone been deposited in the toon, however, than uncanny signs and omens began to manifest themselves, and it was resolved to get rid of it. While it was being taken back to its original position, the horse stuck or fell when taking a somewhat steep little brae, and the stone was taken no further, but buried it where it was. The spot is 80 or 100 yards from the circle!”

What is a Recumbent Stone Circle?

Recumbent stone circles date back to the early Bronze Age. The key feature of the circle is a massive stone slab laid recumbent on its side in the southern or south-western arc of the ring, and flanked by the tallest stones of the circle. The other upright stones in most cases are graduated, with the smallest stones located directly opposite the recumbent stone. The recumbents weigh in at an average of 24 tons and were carefully levered and chocked-up to ensure that their upper surface was as horizontal as possible.

Recumbent stone circles date back to the bronze age and are found almost exclusively in the northeast of Scotland around Aberdeen. Some 99 have been identified, although they bare a distinct resemblance to Irish axial stone circles. (These have small flankers and tallest stones opposite the recumbent stone.)

What was the purpose of a Recumbent Stone Circle

Some have seen the function of recumbent stone circles as solar or lunar observatories. The recumbent stone may have served as an altar and, along with the flanking stones, perhaps formed a false horizon or frame through which celestial events such as the winter and summer solstices could be viewed. Perhaps the long shadows cast by the stones and the low sun at the winter solstice were as important as the stones themselves. where they elaborate calendars used to measure the turning of the wheel of the year?

Others have proposed that the recumbent and its flankers form a framework through which to view the rising or setting of the Major Standstill Moon which occurs every 18.5 years. At this point the moon dips towards the recumbent. Some have suggested that cupmarks on some of the recumbents, flankers and adjacent stones are markers showing where the Major Standstill Moon rises or sets. Cupmarks are cup-shaped hollows or decorations, usually between 10 and 50 mm in diameter.

There is evidence that rituals were performed at the sites of these monuments which included the breaking and scattering of white quartz lumps. In fact, many of the stones on the south side of the circle have veins of quartz running through them. Neolithic and early Bronze Age carved stone balls have a distribution in Moray and Aberdeenshire which almost mirrors that of recumbent stone circles. Could there have been a connection?

The Bronze Age users of the Recumbent Stone Circle

Whatever their purpose, we know that life for their builders was good. The population was small and yet resources were plentiful. These people were farmers, growing barley and perhaps oats and raising cows, pigs, sheep and goats. The rivers were filled with fish, and deer and wildfowl were available for hunting. The climate was slightly warmer than it is today and it has been said that this wealth of resources allowed the people enough spare time to construct these stone circles.