The Minister, The Witch and The Witch Pricker: The Tragic Tale of Kathrin Key

Witch! This was perhaps the most fearsome word encountered by Kathrin Key, resident of the small fishing town of Newburgh in Fife. Witches were powerful. They could curse and cure, make cattle sick, kill children and fly broomsticks. Their magical abilities came from the devil. Satan! Auld Nick! In order to gain that power, they must enter a pact with the devil himself and consummate that alliance by fornicating with Satan himself! This is a tale of curses, witchcraft, a dead child, ailing cattle, arson and how superstition led to the persecution of a vulnerable woman.

Scotland’s Reformation during the Lifetime of Kathrin Key

This was 1653, the middle of Scotland’s Protestant Reformation. In the near future, the Scottish Enlightment would occur putting Scotland at the forefront of science, education, philosophy and the arts. For now, people were still shackled by ignorance and superstition, those great bedfellows of bigotry and prejudice.

The Presbyterian ministers were relentless in their pursuit of a godly society. They would scourge their congregations of sin. Catholicism and idolatry were condemned. Sabbath-breakers and fornicators were pulled in front of the Church Session. The Church Session was a kind of a church court where ministers were puritanical in meting out judgement. Offenders faced the humiliating punishment of being forced to sit on the penitence stool in sackcloth at the front of the kirk, while the minister denounced their sins publicly. There was little mercy. Imagine the fate of those who committed the ultimate sexual sin: witches who allegedly entered a pact with the devil through ritual fornication!

Witchcraft had been deemed a capital offence for all most one hundred years.

Poor Kathrin would have little redress when she was accused of witchcraft following an argument with the local minister, Laurence Oliphant.

The Role of the Presbyterian Church in Witch Trials

Although the church was powerful, it did not have the authority to exercise the death penalty. During cases of alleged witchcraft, the church session would gather evidence and present a case to the Privy Council, the legal arm of the Scottish Parliament. When satisfied, the Privy Council would then organise a Commission to investigate each case. Normally these commissions were composed of gentry and burgesses local to the area where the witch resided.

One of the main options open to the Church Session in identifying witches was the use of a witch pricker. Witch prickers had the lucrative job of finding the ‘devil’s mark’ which witches acquired upon entering into a diabolical pact with the devil. Witch prickers were paid by the number of ‘guilty’ witches they identified. As a result, witch prickers often were the driving force behind witch hunts. In 1649 both John Kincaid and George Cathie were active prickers or ‘broders’. Things were about to change.

Scotland during the Cromwellian Occupation

Oliver Cromwell’s New Model Army defeated their Scottish counterparts on the 3rd September 1650 at the Battle of Dunbar. One year later to the day, Cromwell’s armies met the predominantly Scottish contingency at Worcester and routed them once more. King Charles II was compelled to flee, and the independent kingdom of Scotland was forcibly incorporated into a commonwealth with England. From late 1651, passes were needed to move from one area to another within Scotland. This, in effect, stopped the witch prickers from moving great distances from their homes. The sheriff courts were suspended while the legal functions of the Privy Council and the Court of Session were taken over by commissioners sympathetic to Cromwell’s cause. The Church Sessions were largely ignored. This resulted in the machinery to deal with witchcraft cases being disbanded. The English judges took a more lenient stance on meting out justice on accused witches.

Who was Lawrence Oliphant?

Kathrin Key’s case centred a situation involving the Minister of Newburgh, Lawrence Oliphant. But who was this man? Oliphant was a man of substance, gentry no less. He was heir to the estates of Kilmarone. His father died before he came of age. Eventually, he would sell his lands to Sir David Barclay of Collernie. Was this from necessity? Or because he felt he had a vocation? If he felt he had a vocation, was this why he was so fervent in his pursuit of sinners?

He certainly came from a religious family. His brother, William, was the Minister of Dunfermline and as such preached in the beautiful church which was once Dunfermline Abbey. It was here that many of the ancient Scottish kings had been buried, including Robert the Bruce. It was located next to Dunfermline Palace, which had been abandoned after the Stewart kings ascended to the throne of England.

We know that Oliphant delivered a letter to the King from the synod of Fife apparently expressing their disapproval of his Highness ‘joying to the Malignants’.

Oliphant like many Presbyterian ministers of the time was known to dole out harsh judgements on his erring parishioners. For instance, in 1647 the Kirk elders came under censure for eating and drinking with an excommunicant named Andrew Andersone. In addition, Andersone’s father was chastised for the heinous sin of praying with his excommunicated son.

On the 4th September 1653, Kathrin first appeared before the Kirk Session charged with cursing the minister because he denied her the communion. She denied the charge. However, others claimed to have heard her curse the minister. According to Patrick Beatt, younger, and George Miller she was heard saying in the street, “Their goes the kirkmen the divell take the pack of you.” In the days which followed, the minister came forward with allegations of various acts of malefice she was supposed to have performed against her neighbours and his family in particular. Allegedly, when Christian Orme refused to give her milk, David Orme’s cow passed nothing but blood. When Kathrin was sent for, she clapped the cow and thereafter the cow became well again. A similar tale was told about John Philip’s cow.

A couple of charges brought against Kathrin Key relate to the Minister’s daughter. It seems that Kathrin was one of the infant’s wet nurses. However, after suckling from Kathrin, the babe would not feed from any other woman. After the child was ‘spayned’ (weaned), Kathrin came to visit and held the girl in her arms. It was said that from then on ‘the brain murned and gratt into the night…and nothing could stay her until she died.” This was probably the crux of the disagreement between the minister and his parishioner.

Grief is a strange thing. It is seldom rational. Oliphant was a ‘man of the cloth’ and could hardly vent his anger on God when his grieving turned to anger. It would have been easier for him to accept that his daughter had been taken from him by the devil and the devil’s agent here on Earth, Kathrin Key.

And what of Kathrin? What events had caused her to become one of the Oliphants’ wet nurses? Was she nursing her own child at the time and in desperate need of money? Had she lost a baby and therefore had milk to spare?

A further accusation levelled against Kathrin Key, stated ‘that she is of ane evil brute and fame and so wes her mother befoir her.’ Does this mean her mother had also been suspected of being a witch? Were they a family of healers, once important in a small community who found themselves victims of fear and superstition? Kathrin had been asked to heal ailing cattle.

A Reprieve for Kathrin Key

It seems that none of her neighbours could or would testify to various acts of malefice or witchcraft attributed to Kathrin. Christian Orme, Katharine Geddes and Margaret Philip all confirmed that the aforementioned cows were sick but not that Kathrin Key was the cause of their illness. The wet nurses confirmed that the minister’s daughter would not breast-feed from them and that the child cried a lot but gave no substantial evidence of witchcraft. In March 1654 the elders decided to pass things on to a higher ecclesiastical court, the Presbytery Session. It seems the minister put in charge of the proceedings became ill.

It took until 3rd of May 1655, before the Presbytery Session found Kathrin guilty of cursing the minister, an offence to which she now pleaded guilty. On the 3rd June 1655, the congregation were asked to bring forth evidence of Kathrin committing witchcraft. None was forthcoming. Had the minister been spiteful in his accusations or were the townfolk willing to gossip about Kathrin Key behind her back but none of them was willing to publicly denounce her?

On the 24th of June 1655, Kathrin appeared at ‘the place of repentance’ to be punished for cursing the minister. No dittay (indictment) was produced for the crime of witchcraft. For the moment her life was safe.

But the occupation would not last forever!

In 1659, Charles II reclaimed the throne and Scotland reverted back to its former legal system. Kathrin suddenly became very vulnerable. There is a very telling entry from the diary of John Lamont of Newton, dated November 1661:

“This month, the two weomen in the Newbrought, that were apprehended aboue a yeire agoe, for burning Mr Lawrence Oliphant, minister of Newbrought, his house, were hanged att Cuper in Fyffe, being found guiltie by the Cyse; also they were accused for witchcraft, because delated by some of ther owne nighbours in the towne, who were burnt a litell before this execution; bot thir weomen did confesse nether , bot still pleaded innocencie, as frie both of burning the house, and of witchcraft. Mr Alex. Coluill, justice depute, was present at ther sentence as judge.”

Interestingly, a search of the Survey of Scottish Witchcraft shows that on the 19th November 1661 Kathrin Key and Margeret Liddell were tried for witchcraft. Allegedly they had confessed to witchcraft, forming a demonic pact and renouncing their baptism. A commission was formed to try them. Given the history between Kathrin Key and Lawrence Oliphant, was she the ‘witch’ accused of setting his house on fire? Many accused witches would confess under torture and then withdraw their admission at a later date. We have no record to Kathrin’s final fate although it seems likely she would not have been so lucky a second time.

“This yeire ther were divers persons both men and women apprehended for witchcraft in Lowthian and Edinboroughe, and sundrys of them were burnt; also some were taken in Newbrough in Fyffe and brunt likewyse.”

The witch trials at Newburgh continued into the following year.

Meanwhile, in the shadows watching the proceedings at this time was one Christian Caddell. She was to become Scotland’s only cross-dressing witch pricker for ‘broding’ was man’s work. She claimed that she learnt her trade from watching John Kincaid, at work. Kincaid was the most infamous of all witch prickers in Scotland. By 1660 Kincaid was back in business. It seems likely that he made his way to Newburgh and nearby Abdie, where he could ply his trade on the vulnerable and defenceless.

As for Lawrence Oliphant, his first wife died and he remarried in 1658. In 1662 he converted to Episcopal faith. 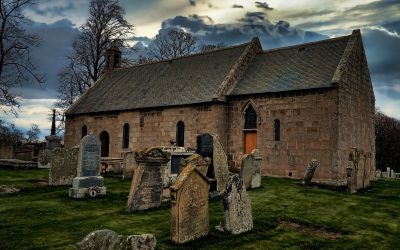