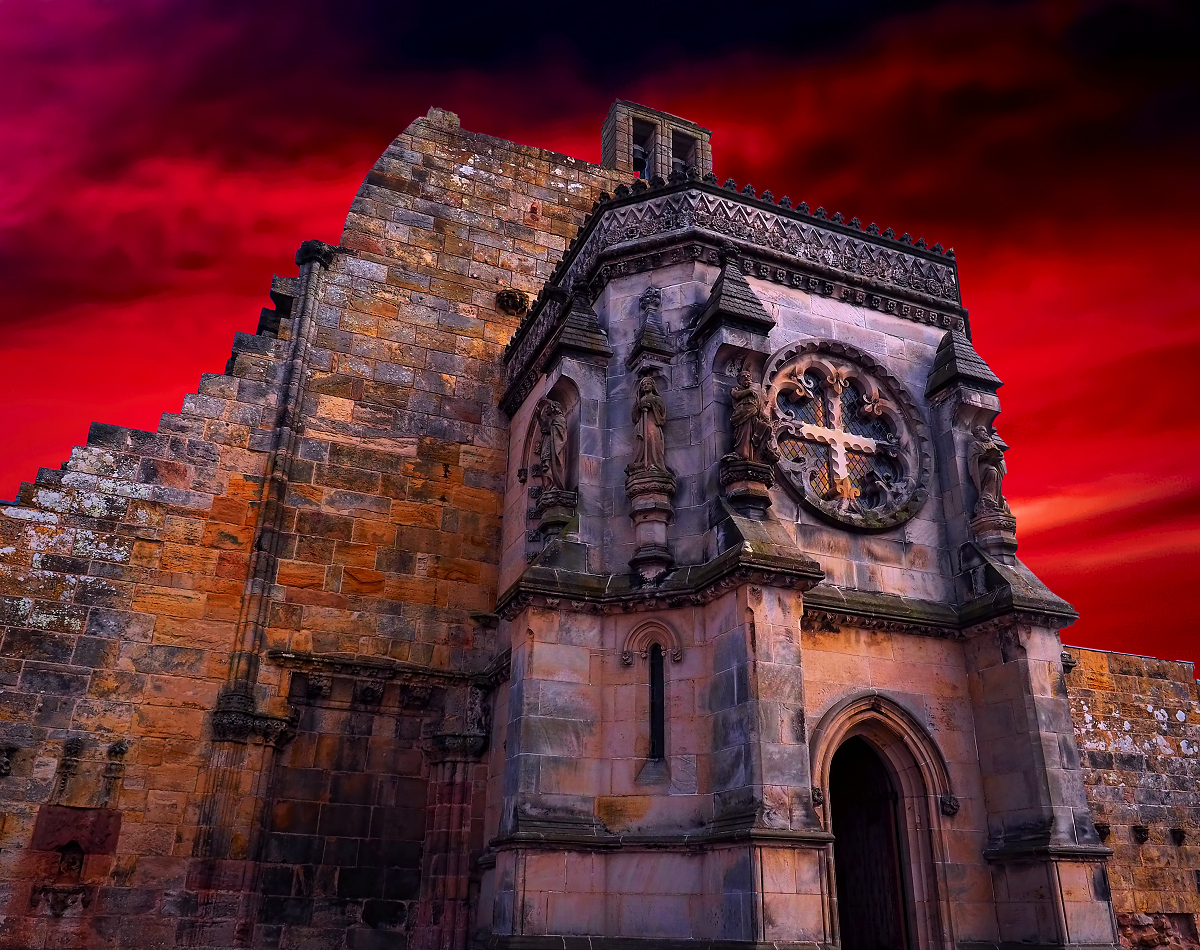 On the 25th of January, Burns’ Suppers are held all around the world to celebrate the birth of the great Scottish Poet, Robert Burns. Perhaps one of his most well-known poems’ is  Tam o’ Shanter. Is it possible that lines to this poem were inspired by his trip to Rosslyn Castle in 1787?

A Trip to Rosslyn Castle

Rosslyn and the St Clairs

The St Clairs were loyal to Robert the Bruce during the Scottish Wars of Independence. Sir Henry St Clair, 7th Baron of Rosslyn, and his two sons John and William fought at the Battle of Bannockburn. When Bruce died, John and William were given the task of carrying Bruce’s heart to the Holy Land, alongside Sir James Douglas and Robert Logan. William, John and Douglas were killed in a fierce battle with the Moors at Teba in Spain in 1330. In 1446, Sir William St Clair began building the Chapel which overlooks the Castle. Today this is more famous than the castle. Rosslyn Chapel must be the most extraordinary building in Scotland, hyper-decorated with stone carvings and mystic symbols. It has become the centre of numerous theories about Knights Templars and grail lore and was thrown into the public eye due to the success of Dan Brown’s novel, ‘The Da Vinci Code’. It is a place steeped in myth and it is easy to believe that this is a portal to other, spiritual realms.

Folklore and its Influence on Robert Burns

Robert Burns was born in 1759 during the ‘Age of Enlightenment’ but also in a time when the country superstitions and supernatural beings were an integral part of folk belief. The landscape of Burns’ was one where the natural rhythms of nature were much more intertwined in the day to day of working life. Some of his poems show a snapshot of country traditions and beliefs at the time, imbued with his sense of humour and satire. Burns was familiarised with tales of the supernatural and folk belief through Betty Davidson, an old maid of Robert’s mother who often stayed with the family when Robert was a young boy. Betty had a large collection of folk tales and songs about the supernatural and recounted many of these tales to Robert which fired his imagination from an early age. He said about Betty Davidson: ‘In my infant and boyish days too, I owed much to an old Maid of my Mother’s, remarkable for her ignorance, credulity and superstition. She had, I suppose, the largest collection in the county of tales and songs concerning devils, ghosts, fairies, brownies, witches, warlocks, spunkies, kelpies, elf-candles, dead-lights, wraiths, apparitions, cantraips, giants, enchanted towers, dragons and other trumpery’.

Burns was sceptical about the supernatural and poked fun at some of the country beliefs of his contemporaries in his poems. However, he admits in a letter to Dr Moore that those early tales of childhood: “…had so strong an effect on my imagination that to this hour, in my nocturnal rambles, I sometimes keep a sharp lookout in suspicious places; and though nobody can be more sceptical than I am in such matters, yet it often takes an effort of philosophy to shake off these idle terrors” We should also remember that although it was the ‘Age of Enlightenment’ it was a time not long after the horrors of the Scottish Witch Trials, when thousands of women were executed on flimsy evidence fuelled by religious paranoia. The witchcraft act was repealed in 1736 in Scotland – only 23 years before Roberts’ birth – and the last trial and execution were in 1727. The fear of the Devil, witchcraft and the supernatural was still very real for many people. The Calvinistic church also had an influence on these beliefs as the Devil and his minions were placed in the role as a direct and present threat to God’s word.

The Impact of Rosslyn on Robert Burns

Robert Burns was a man with an eye for a story. During his trip to Rosslyn, he breakfasted at Roslin Inn. Perhaps, while he was there, he heard rumours of some of the tales attached to Rosslyn Castle and its chapel. Interestingly, Tam O’ Shanter came to life in 1790, when the noted English antiquarian, Francis Grose was writing his second volume of Antiquities in Scotland. Robert Burns asked him to include a drawing of Kirk Alloway. He agreed to this on condition that Burns would write an accompanying poem. Grose and Burns soon became friends. One of the myths about Rosslyn Chapel would be included in Grose’s works, possibly at Burns’ suggestion. A similar event is recorded in Tam o’ Shanter.

Rosslyn, Kirk Alloway and the Legend of the Blazing Chapel

In Tam o’ Shanter we read the following lines: When, glimmering thro’ the groaning trees, Kirk-Alloway seem’d in a bleeze.  Is it possible that Robert Burns got his inspiration from an old legend about Rosslyn Chapel? Apparently, the chapel would shine with the mysterious light of the divine spirit or appear to be on fire, at the death of any of the St Clair family. Walter Scott, Burns’ contemporary wrote about this in the Dirge of Rosabelle: O’er Roslin all that dreary night A wondrous blaze was seen to gleam; ‘Twas broader than the watch fire’s light. And redder than the bright moon- beam. It glared on Roslin’s castled rock, It ruddied all the copse-wood glen; ‘Twas seen from Dryden’s groves of oak, And seen from caverned Hawthornden. Seemed all on fire that chapel proud, Where Roslins chiefs uncoffined lie, Each baron, for a sable shroud, Sheathed in his iron panoply. Seemed all on fire within, around, Deep sacristy and altar’s pale; Shone every pillar foliage-bound, And glimmered all the dead men’s mail. Blazed battlement and pinnet high, Blazed every rose-carved buttress fair So still they blaze, when fate is nigh The lordly line of high St.Clair. There are twenty of Roslin’s barons bold Lie buried within that proud chapelle; Each one the holy vault doth hold – But the sea holds lovely Rosabelle ! And each Saint Clair was buried there, With candle, with book, and with knell; But the sea-caves rung, and the wild winds sung The dirge of lovelv Rosabelle.

The Black Ghost Dog of Rosslyn

In Tam o’ Shanter he writes about the Devil appearing in the form of a black dog and leading the macabre celebrations at Kirk Alloway, He wrote: There sat Auld Nick, in shape o’ beast- A touzie tyke, black, grim and large. (tyke is a Scots word for a dog)  Significantly, Rosslyn Castle is said to be haunted by a black ghostly dog. Rosslyn Castle overlooks the site of the Battle of Roslin. This was fought on the 24th February 1303 and is said to be the bloodiest battle ever fought on British Soil. The Scottish Force was a mere 8, 000 men while the English host was almost four times larger. An estimated 35,000 men lost their lives that day. It is said that one of the English knights was master of a large hound. The knight was slain by a Scottish knight, whereupon the dog attacked the Scotsman. Alas, in defending himself from this canine titan, he was forced to kill the dog. That very night, as the Scots rested in the confines of Roslin Castle, the spirit of the slain dog appeared in the guardroom, much to the terror of the billeted troops. As the dog appeared nightly, the soldiers nicknamed it the ‘Mauthe Doog’. Eventually, the night came when the dog appeared to his master’s killer. Walking down the passage, the man screamed in terror when confronted by the snarling spectre. That was the last sound which his lips uttered. He died three days later. Today on dark and stormy nights, the phantom hound is heard baying over the wind. Meanwhile, several dogwalkers testify that their normally biddable dogs will go crazy near the castle ruins as if they are seeing something we cannot.

Other Apparitions at Rosslyn

The black hound is not alone in haunting Rosslyn, for a Black Knight on horseback has been reported on several occasions, possibly a victim of the Battle of 1303. The ghost of a white lady is reported to frequent the area.

Tam o’ Shanter is a masterpiece inspired by many Scottish myths and legends. Today as we celebrate Robbie Burns, let’s remember the words from another of Burns’ poems: We’ll tak a cup o’ kindness yet, For auld lang syne.  Please share your comments in the box below or share the spooky using the links below. 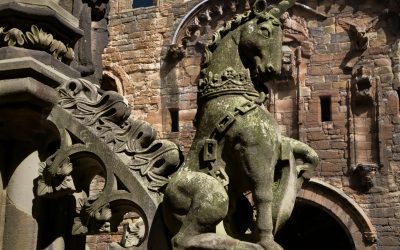